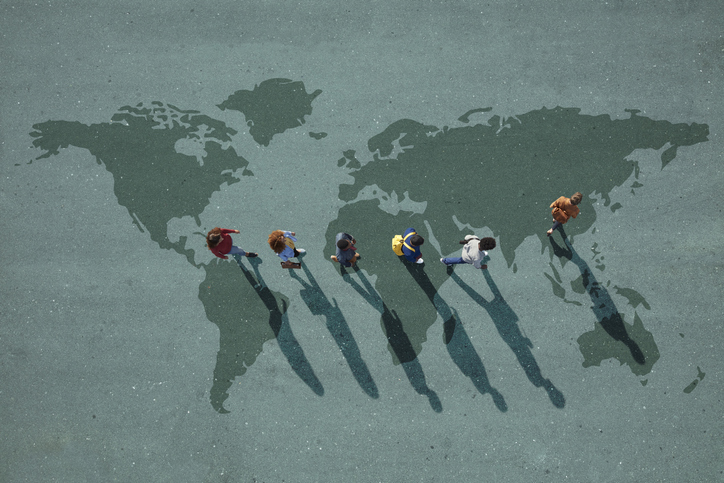 Group of young adults, photographed from above, on various painted tarmac surface, at sunrise.

Many questions remain since the emergence of The Great Resignation, especially since the pandemic seems to be waning. Are there forces that will continue to drive workers to quit their jobs? If so, what are they? What impact will those forces have on intercountry and intercontinental business relationships?

What changes are employees still looking for in their careers, and how can employers respond to their expectations to attract and retain top talent?

We’re giving a broader scope to the geography of The Great Resignation by taking a closer look at how it has impacted various global regions.

Update on The Great American Resignation

Anthony Klotz, a psychologist and professor at Texas A&M University, first used the term The Great Resignation in 2020 when he discovered that workers were quitting their jobs by the millions. The quits have not stopped yet. From July through December 2021, over 4 million more workers quit their jobs each month. A total of 47.4 million workers left their jobs voluntarily in 2021, which was unprecedented considering the quit rate in 2019 was 42.1 million.

What industries are people quitting in the United States? Mostly retail and hospitality, where workers find more rewarding jobs that pay more in other industries.

United States employers in these industries struggle to pay higher wages to retain their current employees.

The picture looks very different for our northern neighbor in Canada.

The Great Resignation of Canada

Brendan Bernard, Senior economist at Indeed Canada, says, “We don’t have any hard data in Canada to really show that there’s a sustained upswing in employed workers voluntarily leaving their jobs — at least more so than normal times.”

Statistics Canada reports the number of workers who switched directly from one job to another is still below pre-pandemic levels.

A Statscan Labour Force Survey shows that workers who left their positions are more dissatisfied than before the pandemic, but the percentage doesn’t exceed that of 2019.

From an industry standpoint, hospitality jobs are lagging, and technology positions are soaring.

The Great Resignation 2021 in the United Kingdom

Job vacancies have never been higher, and employers struggle to recruit employees and hang onto the ones they have. Moreover, increasing numbers of workers leave the job market entirely or switch to part-time work.

What’s different in the United Kingdom is how business owners are tackling the problem. Like the United States, employers are increasingly offering higher wages and flexible working conditions. Also, about 30 businesses are doing a 6-month trial of offering a 4-day work week to see if it improves retention.

The Great Resignation in Australia

The picture of the Australian job market has a flavor of its own in Australia. The number of workers far outnumbers the number of available jobs, and workers are increasingly hopping between jobs.

As of October 2021, there were over 700,000 workers who were either unemployed or under-employed, according to the Australian Bureau of Statistics. Job vacancies are hovering around 333,000. The following statistics highlight the top four industries with vacancies:

LinkedIn reports a 26% increase in Australian workers who switched jobs compared with pre-pandemic levels. Many of them may be switching to industries such as IT, law, human resources, life sciences, mining, and finance, as these industries are apt to pay higher salaries.

The Great Resignation in Asia

The problems that the pandemic caused for workers in Asia are as varied as the countries that make up the continent. Fashion, technology, and manufacturing have all been impacted by workers resigning.

The younger generation is shying away from working in manufacturing centers because of low wages, causing a labor shortage in the factories.

Asia claims to have a growing shortage of skilled workers in the technology industry.

Migrant workers in Vietnam who were working in cities returned to their country homes and had no intention of returning.

The pandemic put a drain on fast-fashion supply chains, causing wage losses for millions of garment workers. It has been devastating in an industry with a reputation for human rights abuses.

One survey of garment workers in Honduras, Myanmar, Ethiopia, and India found that many had no choice but to borrow money and go into debt. Those who stayed reported greater risk, lower pay, and worse working conditions.

The Geography of The Great Resignation: What Is the Global Impact for the Future?

Klotz, who came up with the idea of The Great Resignation, predicts there will be three trends spanning the globe as we move into the future — the quit rate will slow down, flexible work arrangements will become the norm, and remote jobs will become more competitive.

He suggests that The Great Resignation will continue in 2022 but at a much slower pace as workers settle into new jobs and norms. Companies are starting to offer higher salaries and better benefits, and employees will take it gladly.

A WFG Research project, as reported by CNBC, shows that workers value having flexibility as much as they value a 10% pay raise. If companies want to retain their employees, they will have to offer some amount of flexibility.

Companies will also use automation such as digital waiters, automated concierges, and other technology to reduce hiring times and replace workers. While this is not a good thing for workers, American workers need to recognize that they make more than workers in other companies, and a remote workforce means companies can hire workers at a lower rate than many other parts of the world.

To sum things up, the overarching trend that has come out of The Great Resignation is employees prefer to fit their work around their personal lives rather than the other way around, and the pandemic showed them just how possible that could be.

“It’s clear that there was extreme hardship faced by both businesses and workers during the prolonged lockdown,” said Mary Tarnowka, executive director of AmCham Vietnam in Ho Chi Minh City, to the Financial Times. “And there was particular pain and hardship for people at lower income levels who didn’t have money for rent or food.” Washington Post

“Workers were already not being paid fair wages and had little savings at the beginning of the pandemic,” said Zameer Awan, a field worker with the Pakistan Institute of Labour Education and Research, to Reuters. “Now most are deep in debt, and those who have found jobs again find themselves in more abusive conditions but without a voice anymore.”

“The UK labour market is as tight as it has ever been in recent memory,” he wrote in a note sent to Deutsche Bank clients. “Indeed, a swathe of metrics all point to one of the hottest labour markets coming out of the pandemic.” Sanjay Raja, chief UK economist at Deutsche Bank

Ann Francke, chief executive officer of the CMI, said the January job market would become “even more fierce as employees seek out new roles that meet their changing demands and aspirations.”

“Just offering big budget salaries isn’t cutting it anymore,” she said. “Managers who aren’t adapting their working models will be left wanting — and their organisations will pay the price.”

Need Help With Board Succession Planning

Board succession planning is most effective when organizations prepare well in advance. Download our Board Succession Planning Kit for key tips and best practices to follow.

What Is a Strategic Planning Committee?

The two basic duties of boards are oversight and strategic planning. Depending on the size…

Basics and Best Practices for Nonprofit Board Governance

Giving Tuesday: How BoardEffect Is Giving Back to Nonprofits