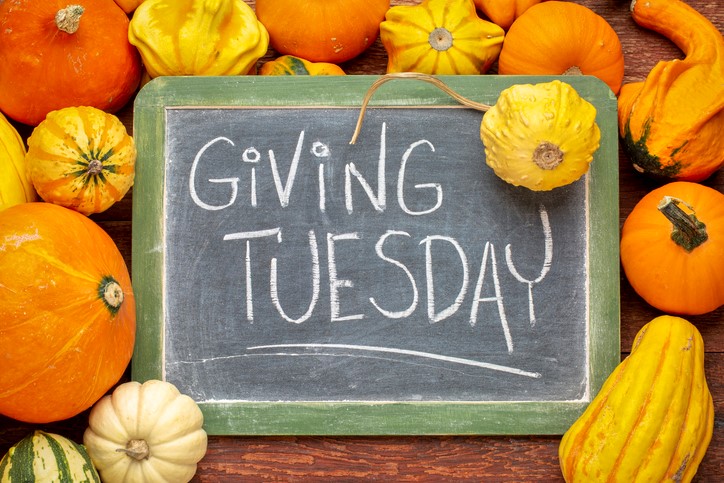 The holiday season reminds us of all the reasons we love to give and receive. It all begins right after Thanksgiving, with the Black Friday sales beginning at midnight, followed by tons of sales for online shoppers on Cyber Monday. After the initial holiday shopping rush, it’s Giving Tuesday — a time for people to give back to the organizations that serve them and those they love all year long.

Giving Tuesday was created when the 92nd Street Y and the United Nations Foundation came together in October 2012 to get the “giving season” off to a good start. The founders wanted to remind people that there’s more to the holiday season than commercialization and buying gifts. The original two founders were soon joined by Cisco, Mashable, Iraq and Afghanistan Veterans of America (IAVA), Sony, Aldo, Groupon, UNICEF, Google, Skype, Microsoft and Unilever, which became additional founding members. Mashable made the public announcement, and Giving Tuesday quickly went viral.

Lots of people save a little bit all year round in order to ease the strain on their budgets during the holiday season. Giving Tuesday also has people thinking about planned giving for Giving Tuesday. The question for nonprofits is, “How many people would be willing to designate your nonprofit for their charitable giving on Giving Tuesday?”

BoardEffect makes it easy to streamline each aspect of board work all in one secure, centralized platform. Learn how your organization can leverage BoardEffect to improve governance and boost board effectiveness.

How to Get Your Organization on Board With Giving Tuesday

Here are five easy steps to get your fellow directors on board with starting a Giving Tuesday campaign:

Place Giving Tuesday on your board agenda and be prepared to talk about how it can bring in substantial donations for your organization. Convince board members by telling them more about how it works.

Giving Tuesday is a popular event. Most people know that it comes right after Cyber Monday and they’re weighing their options early about which charities they want to make donations to and how much they want to give. Many people also need to donate money at the end of the year for tax reasons.

People are receiving emails, postcards and social media ads from lots of nonprofits in the weeks around Thanksgiving. If they don’t see the name of your organization, they’ll be just as happy to donate to a different one.

Share with your board that, according to a 2014 statistic, 31% of charitable giving happens in December. In addition, 12% of people make donations to nonprofits in the final three days of the year. Giving Tuesday is a one-day event, but it generates contact information for potential donors that will allow your organization to solicit them all year long. Consider piggy-backing on your Giving Tuesday campaign by sending out a postal mailing or an email blast during the final three days of the year to make it easy for donors to give again if they wish.

Talk about how much fun it could be for board members and other members of the organization to post selfies with cards that say, “I support XYZ Organization because… #GivingTuesday”. You could also throw a Giving Tuesday party, send out donation cards to the people on your donors’ list, and seek out a sponsor that would match some or all of the donations.

It won’t take much convincing when your board realizes how many different ways your organization could source money. Consider these sources of donations on Giving Tuesday:

Remind your board that Giving Tuesday is just one day, but the connections you make then may become potential long-term donors.

Encourage everyone to keep the campaign light and fun. Everyone loves a cheerful giver. You might consider doing some internal competitions. A little competitiveness never hurt anyone, and some fun competition can help to raise the bar nicely.

Let your board know that you can provide sample content for email requests and social media posts. Offer to coach them on how to approach family members, friends and business acquaintances and what to say. Provide each board member with the 2019 Giving Tuesday Communications Toolkit, which is bursting with ideas and communication strategies for a successful Giving Tuesday campaign.

Closing Out Your Giving Tuesday Campaign

Don’t forget to offer a few words of sincere thanks to those who give. Donors appreciate getting a kind note, follow-up letter or email telling them once again how important their donation is and how the organization plans to use their gift to support the organization’s mission.

After Giving Tuesday, schedule some time after your holiday celebration to review your campaign and determine what you can learn from it. Which things worked great? Which things didn’t work so well? How can your organization build an even bigger and better campaign for the next year?

Store all of these ideas in your BoardEffect board portal so you don’t have to reinvent the wheel next year. Get some planning dates on the next year’s calendar so you can start on the campaign planning nice and early.

Finally, count your money! Get the results from your website donations, social media donations, new memberships, community members and business sponsors and watch the total soar! It won’t be difficult to get the most skeptical board members on board for the coming year when they gain the assurance of how successful a Giving Tuesday campaign can be.

Dottie Schindlinger is Executive Director of the Diligent Institute, the governance think tank and research arm of Diligent Corporation. In her role, Dottie promotes the intersection of governance and technology as a recognized expert in the field. She co-authored Governance in the Digital Age: A Guide for the Modern Corporate Board Director, ©2019, John Wiley & Sons Publishers, and is creator and co-host of The Corporate Director Podcast, a fortnightly show featuring corporate directors sharing their stories about modern governance.
Dottie was a founding team member of BoardEffect, a board management software platform launched in 2007 focused on serving the needs of healthcare, higher education & nonprofit boards. Prior to BoardEffect, she spent 15 years working in a variety of governance roles, including as a board support professional, consultant, trainer, board member, and senior executive. Dottie serves as the Vice Chair of the Board of the Alice Paul Institute, and is a Fellow of the Salzburg Global Seminar. She is a graduate of the University of Pennsylvania.

5 Tips to Increase Virtual Board Effectiveness

The Role of the General Counsel in Governance

As 1999 turned over its digits and became the year 2000, many changes quickly took…

How to Use a Board Portal to Hold the Greatest Board Meeting. Ever.

Recently, I had the pleasure of attending a workshop presented by Susan Howlett, a private…