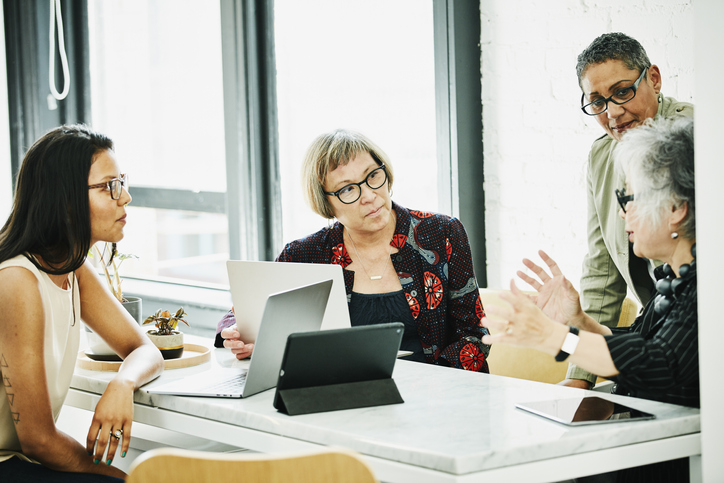 Key legislation and codes of practice relating to diversity are important topics to put on your nonprofit board agenda because they affect your board, staff, employees, donors, and stakeholders.

We’re providing a brief overview of the current diversity legislation and how it impacts health and social care, education, and the workplace in general. Diversity and inclusion practices make for good nonprofit board discussions.

Current Legislation on Equality and Diversity

Congress has taken note of the need for equal opportunities diversity legislation in the United States, but getting legislation passed has been incredibly slow. The current legislation on equality and diversity is the Equality Act. Before we look at this important diversity and inclusion legislation, let’s take a look at its history.

What would the Equality Act do if it passes? It’s a landmark bill that would expand federal civil rights laws to protect people in the LGBTQ community against discrimination in employment, housing, credit, jury service, and all programs that receive federal funding. This would include programs that provide health services and education. It would also apply to public places and spaces.

There’s strong support for the Equality Act among organizations and the general public. Over 300 businesses have joined together under the Business Coalition for the Equality Act in support of this legislation. A new poll in 2020 showed that about 76% of Americans support LGBTQ nondiscrimination legislation. About 85% of Democrats support the bill, and 62% of Republicans support it as well. According to the survey, over 100 faith organizations are also in support of the bill.

Equality and Diversity in Legislation in Health and Social Care

Everyone relies on healthcare services over the course of their lifetime. Many people also depend on social services to meet their daily needs. While all people should have equal access to these services, the reality is that it doesn’t always happen that way.

Various laws have been passed over the last couple of decades to ensure that all people have fair and equal access to health and social services. Simply put, all people should be treated with dignity and respect, and equality and diversity legislation in health and social care protects those basic human rights.  But the intent of the laws is much more than that. They’re intended not just to protect individuals but also to celebrate their differences.

Large numbers of people have disabilities, illnesses, and age-related issues that make it difficult to care for themselves. They come from all walks of life.

In addition to the Equality Act, the following laws have been enacted to support people that rely on healthcare and social services:

Anyone who works in the field of health or social services should be familiar with these laws and abide by them.

Equality and Diversity in Education Legislation

The United States is comprised of a huge melting pot of people who are characterized by a wide variety of cultures and ethnicities. Equality and diversity in legislation affects individuals that work in the educational field and the students that attend schools.

The numbers of minorities in schools are steadily increasing. The U.S. Census projects that only 36% of people under the age of 18 will be single-race non-Hispanic white by the year 2060. All children have a right to a free and appropriate public education (FAPE) as a basic constitutional right, including students that reside in the U.S. illegally.

These numbers have a strong bearing on the need for teachers to incorporate culturally responsive practices in their classrooms, at every level of education. In addition to race and ethnicity, students need equal protection in the areas of religion, economic status sexual orientation, gender identity, and foreign languages.

It’s not only students that need such protections. Educational institutions also employ large numbers of diverse people, and they need equal protection too, which brings us to the next topic —diversity in the workplace legislation.

Diversity in the Workplace Legislation

All workers are entitled to certain protections within the workplace under state and federal laws. Employers are required to provide their workers with a fair and safe work environment.

Several laws have been passed over the last 50 years to prevent unlawful and unfair employment practices. Here’s a list of some of them:

As an employer, your nonprofit board is responsible for ensuring that employees have the proper training to promote and enforce a diverse workplace.

Here are some things you can do to support fair employment practices within your nonprofit:

Be aware that by ignoring the importance of workplace diversity legislation, the actions and behavior of people that work for your nonprofit could pose risks to your nonprofit that lead to lawsuits, fines, and other legal issues.

As we’ve shown, your board has a lot to keep up with related to equality and diversity legislation and codes of practice. Your BoardEffect board management system is the perfect tool for storing information about equality and diversity legislation. With unlimited document storage and granular permissions, your board can have access to these and other documents any time they need them.

See why over 180k users rely on BoardEffect for their board portal solution!

The Five Keys to Risk Management for Higher Education Boards

All successful enterprises need to take risks in order to grow and flourish. The percentage…

10 Characteristics of Successful Board Relationships

The duties and responsibilities of board directors are more complex and difficult than ever before.…

The Board at Year-End and the Power of Fresh Perspective

Fresh perspective can transform… well, almost anything. When a new BoardEffect administrator recently took the…