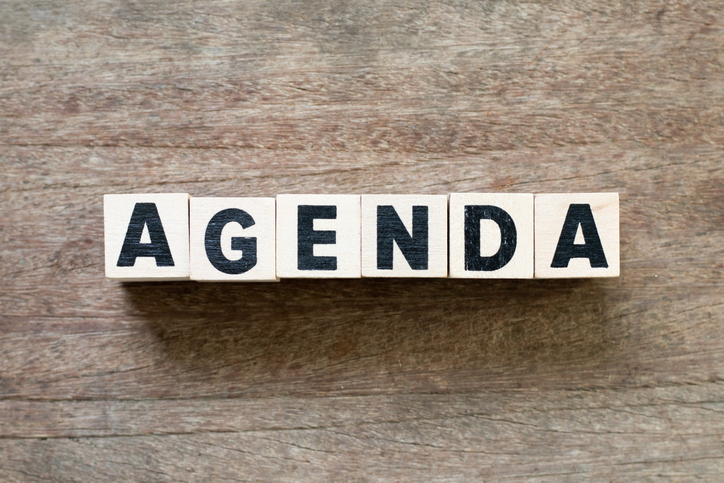 Can a board member add an item to a nonprofit board meeting agenda or rearrange the order of the items on a proposed agenda before it gets voted on? That’s just one of many questions newer board members have about nonprofit meeting agendas that Robert’s Rules of Order can answer.

The answer to the initial question is yes. In this situation, all a board member has to do is make an oral motion to add the item to the agenda or motion to rearrange the order of the agenda. A simple majority in favor of the motion is all it takes to amend the agenda before it gets approved.

Where Did We Get the Rules for Nonprofit Board Agendas?

Robert’s Rules of Order, written by Henry Martyn Robert, is a manual that describes the rules for parliamentary procedure. Its principles are the most widely used protocol for meetings in the United States and other English-speaking nations. Despite being written in the late 1800s so well thought out Robert’s Rules of Order, its meeting principles are still in use today. Of course, the rules have been updated many times for clarification and to reflect modern meetings.

Since your agenda outlines the issues your board addresses at every meeting, Robert’s Rules has clear rules for handling your agenda.

Robert’s Rules is a valuable tool for almost any kind of meeting. Whether your board meeting is formal, informal, or virtual, Robert’s Rules guides the way. Robert’s Rules are so versatile; they also pertain to executive sessions, special meetings, conventions, and mass meetings.

Who Sets the Agenda for a Board Meeting?

The board chair is the primary person who creates board meeting agendas. Typically, the board chair consults with the executive director when setting board meeting agendas. Board chairs may or may not openly ask officers and board members if they want to add items to the agenda. Either way, all board members have a right and a responsibility to bring important matters before the board.

What’s more, the board chair isn’t allowed to disallow meeting agenda items unless they relate to decisions the board previously made. It rarely happens that a board chair would not allow an item to be added to the agenda. If it should happen, it’s considered an abuse of authority, and any board director can move to add the item to the agenda and put the motion to the vote regardless.

Amending the Meeting Agenda According to Robert’s Rules of Order

What happens if a board member calls for a motion for debate that belongs to the meeting and decides not to present the motion after the agenda has been adopted? The board member making the motion can’t simply withdraw it. A vote would need to be taken and passed by a two-thirds majority vote or fail. Any other board member has the right to move the motion forward.

As a facilitator, how would the board chair handle this type of situation? Ordinarily, the board chair would announce that someone requested to withdraw the motion and ask if anyone had an objection to it. If there are no objections, the chair can move on to the next item of business. If no one objects to the withdrawal, it’s considered a unanimous vote to pass on the vote for the withdrawn motion.

To sum things up, once the board adopts the agenda, all motions move forward unless one of the following things happens:

No one moves a motion

In short, a motion to amend the agenda requires a simple majority vote. After the agenda is adopted, the vote requires a two-thirds or larger majority to pass.

What Does a Sample Board Meeting Agenda Template Look Like?

We’ve put together a board meeting agenda template that coincides with Robert’s Rules of Order for the business of order for agendas as a resource.

As helpful as the rules are, they can be complicated depending on the situation. With BoardEffect, you can store Robert’s Rules of Order directly on your board management platform so board members can access them at any time.

How to Create a Sustainable Organizational Culture for Your Nonprofit

As board members and volunteers rotate in and out, the task of how to create…

Board Evaluations: The Complete Guide for Nonprofits

When you serve on a nonprofit board, you’re invested in the cause and naturally, you…

Top 12 Security Considerations for Your Nonprofit Board

As a nonprofit board director, you’re highly dedicated and invested in your cause. In a…