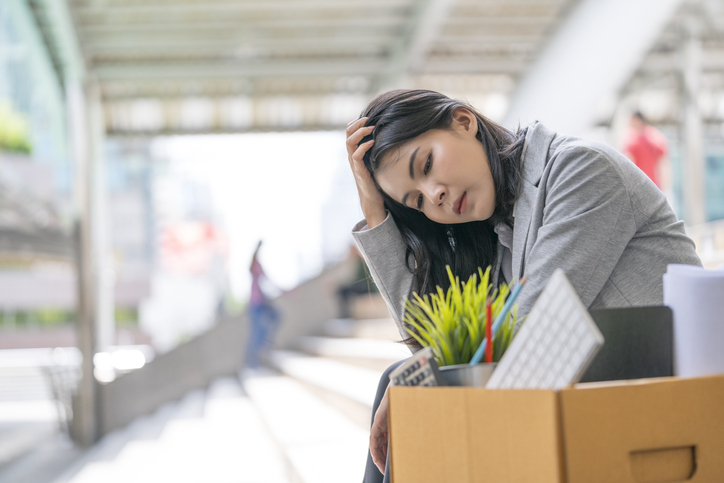 Businesswomen being fired feeling no job frustration, sitting outdoor with her office box in city

“The Great Resignation is still in full swing, even if quits are moderating somewhat,” Daniel Zhao, a senior economist at career site Glassdoor, said in a tweet.

The coronavirus began to spread in the United States early in 2020, and it so disrupted the status quo that just over a year later, an unexpected phenomenon occurred. People were quitting their jobs by the millions.

At a rate of 48 million, more people quit their jobs in 2021 than ever before in our country’s history. As we move into 2022, it’s fair to ask whether people will continue quitting their jobs at extraordinary rates.

Is the Great Resignation Continuing to Happen?

We can get some insight about the Great Resignation from the Bureau of Labor Statistics, which puts out regular reports about the job market in the United States.

The most recent report shows that the labor force increased by 304,000 workers in February 2022. To be clear, the U.S. Department of Labor defines the labor force as people who are either working or actively looking for work. While the labor force is growing at a healthy rate, it’s still shy of the pre-pandemic level of 592,000 workers.

The record for the most workers quitting was set in November 2021 when 6.3 million workers quit their jobs. In January 2022, the number was 4.3 million, so the number seems to be trending downward. Job resignations have been up 23% since before the pandemic started.

The hardest-hit industries are as follows:

At least for now, the Great Resignation is continuing, and next, we’ll look at why it’s continuing to happen.

The Great Resignation Manifests as the Great Renegotiation

Over two years later, it would make sense that people would be finding a new normal and settling into new jobs and routines. To better grasp why the Great Resignation is still happening, let’s look at the reasons workers quit their jobs.

Surging stocks and a booming housing market have caused older workers to rethink their retirement plans. Many have moved up their retirement date as the current economic climate allows them a more comfortable retirement much earlier than anticipated.

Parents with school-age children found it too difficult to continue working while homeschooling their children or monitoring them with virtual learning due to lengthy or periodic school closures. When it came time to return to work, some went out of the workforce altogether because they felt burned out. A report by McKinsey & Company shows that women spent 20 hours caring for their families, doing housework, and working full-time hours. Others sought higher wages and better benefits either in the same fields or in different industries.

Other workers quit their jobs because they were opposed to wearing masks or being required to get vaccines for COVID-19.

The Great Resignation ignited another unexpected job phenomenon — job switching for better opportunities. With so many people quitting their jobs, employers found themselves unable to fill positions. It became much harder to recruit and hire talented workers. To overcome the challenge before them, employers tried to attract workers by increasing wages, improving benefits and offering more growth opportunities. One survey said employees might be able to expect merit increases of 5% or more.

In addition to higher wages, the temptation for workers to switch jobs includes enhanced benefits, greater flexibility, and better treatment. Workers are simply in a better place to bargain, and it’s worthwhile to switch jobs to better themselves and their situations.

Moreover, supply chain issues have caused rampant product shortages and inflation. With everything costing more, it makes sense to aim for higher-paying jobs.

When accounting for inflation, the real wages fell by about 2.4% for American workers in 2021 despite quitting and renegotiating. The New York Times poll showed only 17% of American workers felt their pay was enough to keep up with inflated prices.

How Much Longer Will the Great Resignation Continue?

American leaders are touting that inflation would be temporary, but that hasn’t been the case. There is much concern that we could be entering a nightmarish cycle of rising prices due to demands for higher wages, which creates a cycle of companies raising prices even higher in response.

Overall, the Great Resignation is still happening, at least for now. People didn’t quit their jobs because they didn’t want to work, but quite the opposite. Most workers saw opportunities to get a leg up on their careers and finances, and they had nothing to lose.

One of the great things that came from dealing with the pandemic is it created such a life-and-death fear that many people started to rethink their priorities. None of us are promised the gift of tomorrow. After spending years in dead-end, unfulfilling jobs that paid low wages, many workers seized the moment to make a better life for themselves and those they care about. They’ve changed their views about work and life, and they’ve repositioned their priorities based on the most important things to them in their lives.

While that’s a great position to be in, it could come at an even higher cost. A wage-price spiral could potentially leave workers and businesses worse off for the wear.

Has The Great Resignation Affected Your Organization?

The Advantages of Technology for Nonprofits

In many ways, nonprofit organizations have disadvantages in comparison with for-profit corporations. They often lack…

Understanding the Importance of Board Transparency

Improving Board Education for Nonprofits

Passion is often the thing that motivates people to serve on a nonprofit board, but…